Write it Down, Make it Happen (Part I)

I sat in the silent warehouse, breathing in and out, following the rise and fall of my breath and trying to ignore my racing heart. It was a Saturday morning. My shaking foot belied the serenity I hoped to convey to anyone watching, knowing that soon I'd be giving—what I imagined to be—the performance of my life. It was still unbelievable to me that an event at the beginning of the week presented this opportunity; that something wished for years earlier could manifest in such an extraordinary way. This outcome was so much more incredible than I ever could have imagined: I had thought about it, written about it, but had no idea how it would all unfold. 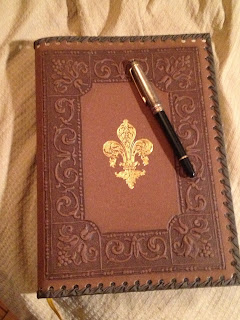 I can attest to the value and power of the written word as someone who has been journal writing for twenty-three years. Not only have I written for my life during times of crisis, but I have actually written my life, which is exciting and empowering—knowing that I am the creator of my life.There are numerous examples in my writings to support this assertion. The above experience contains several layers of manifestation that culminated in one extraordinary outcome.

I always wanted to be an actor. My best friend, Lynn, who is a bigger pack rat than I, sent to me when I was going through cancer treatment a list that our fifth-grade teacher had compiled. All her students' names were on it and next to each name was the occupation we wanted to be as adults. Next to my name was the word "actress." I hadn't done any acting in grade school or high school, but I mustered the courage and returned to college to study drama at the age of twenty-three.

During that time, I auditioned for all the theatre department's plays. One play (of many) in which I failed to get cast was Talley's Folly, a two-person show by the late Lanford Wilson. I fell in love with the character of Sally Talley and knew I had to portray that character someday. Exposure to this play turned me into an admirer of Lanford Wilson's work, reading nearly every play he wrote, or so I thought.

I began keeping a journal in 1992 and would write about roles I was exploring in class or in a play. Lists of shows and characters I longed to perform were recorded in my diaries too. One day, I came across a show by Lanford Wilson titled The Moonshot Tape that was in an anthology of one-act plays. This one-act was a solo project, and I was immediately drawn to Diane, a deeply flawed yet fascinating character. Diane is thirty-five years old, an accomplished short-story writer, and possesses a rather sordid, complicated past. Here was another role I committed to one day performing, not having a clue how, when, or where it would happen. I was twenty-seven at the time and had also been contemplating starting my own theatre company upon obtaining my drama degree. All of these goals were written about in my journals.

I ended up in Cincinnati, Ohio, after graduation, initially getting involved in that city's vibrant and massive community theatre scene as both an actor and director. While directing The Diary of Anne Frank, I met Lisa, a talented actress whom I'd cast as Mrs. Frank. We began discussing starting our own semi-professional company. I did research, constructed a business plan, and wrote about this endeavor constantly in my journal. In the end, it seemed like too monumental a task for two people; it started to overwhelm me. Plus I longed to focus solely on acting.

We put that venture aside and  both continued performing. Not long after, Lisa was cast in a community theatre production of The Secret Garden where she met Joe, Mark, and Scott who too had the desire to start a professional theatre company. They approached her to see if she might be interested in joining them. To which she responded: There is someone you need to meet. We did and soon Ovation Theatre Company was on its way to becoming a reality.

The next year was spent planning, budgeting, fundraising, and on July 4, 1997, we signed Ovation's incorporation papers, filing as a 501(c)(3) organization. During this preparatory period, I was cast in the role of—you guessed it, maybe—Sally Talley. Finally, here was the chance to perform one of my dream roles. Sally is thirty-one and I was thirty-one when I portrayed her. Mike, the director, was fantastic and because I enjoyed working with him so much, I gave him a copy of The Moonshot Tape and told him that if I ever performed this role, I wanted him to direct me.

In September 1998, Ovation staged its inaugural production, the two-woman comedy, Parallel Lives: The Kathy and Mo Show. Lisa and I starred in it. We directed it too, along with one of our co-founders Scott. It was thrilling. Another dream had come true. To reiterate, these were all goals and hopes I'd written about either in my journal or strategized about in lists on separate pieces of paper. I was constantly writing, thinking, and putting those ideas into action. However, the best was yet to come...


What goals or dreams have you written about that have manifest in your life? Please let me know in the comments or email me at deborah@deborahludwig.com. I may use them in a future post, with your permission of course.