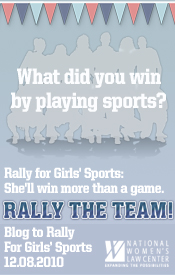 The National Women’s Law Center is rallying today to support girls’ athletics. They asked bloggers to write about their involvement in sports and how it positively affected their lives. The question they asked: What did you win by playing sports? The following is an excerpt from The Accidental Feminist, an essay I wrote that was to be included in a friend’s anthology about feminism. Although she abandoned the project a couple years ago, I’m glad to be able to share a portion of my essay in this post.
What did I win by playing sports?
My journey starts with Title IX. Title IX of the Educational Amendments of 1972 states: No person in the U.S. shall, on the basis of sex be excluded from participation in, or denied the benefits of, or be subjected to discrimination under any educational program or activity receiving federal aid. Athletics has created the most controversy regarding Title IX, but its gains in education and academics are notable, as more and more women are receiving post-graduate and professional degrees. Before Title IX, many schools refused to admit women or enforced strict limits.

I was six years old when Title IX became law. I had no idea that it even existed until I was in college; or that it was largely due to this that I was able to be a junior high and high school athlete; or that I was allowed the same opportunities to participate in athletics as the boys in my school. I’m not even sure I was aware that sports participation for girls in schools had been an issue at the time. What I did know was that I loved competing. And until I reached the age of ten, I could beat almost every boy in my class in sprints. That did change some once I was in high school, yet I managed to claim the girl’s track MVP title all four years. My sisters excelled in athletics, too. In fact, I recall my father telling me at one time that the high school football coach told him that he wished we three girls were boys.

Title IX paved the way for young girls to actively participate in organized sports, which I believe builds strength, confidence, and an eagerness to engage in competition, not shy away from it. We compete every day, in one way or another. Sometimes we win and sometimes we lose, but I believe this about competition: When you lose, you pick yourself up and try again. This attitude has helped me to overcome obstacles and persevere in the face of tragedy. I face rejection constantly as an actress, but I have developed a thick skin (though admittedly, not as thick as I’d like). I know that if I attend enough auditions, I’m going to book jobs, so I keep doing it. I am a cancer survivor, and I wholeheartedly believe my competitive (or perhaps my fighting) spirit and the refusal to give up helped me regain my health.

The opportunity to compete empowers you to believe you can meet the goals you set. Because I was able to compete with members of the opposite sex at a young age, and then able to compete like them in the sports arena, I always felt women were as valuable as men. I was as competent, as smart, and as capable of accomplishing and doing anything they could. And so, my first foray into actively pursuing equal opportunities, where I saw girls blatantly excluded, occurred during my eighth grade year at St. Paul’s Catholic Grade School in Tell City, Indiana.

St. Paul’s housed grades K–8. Part of that Catholic education included attending Mass once a week during the school day. At that time, all the acolytes were boys. When I was in eighth grade, my friend Mariah and I decided that we wanted the opportunity to be altar servers, so we asked Father David Coats if we could do this. We felt that it was unfair that the boys could participate in the service this way and we couldn’t. Father Coats, being well ahead of his time, agreed that we should be able to serve. His decision caused quite the uproar.

The boys in our class were terribly upset that we would dare infiltrate their male domain, so much so that they called a meeting about it, which Mariah and I attended. In the end, we were allowed to serve. Mariah and I were the first girl servers at our church. After that, several other girls decided they wanted to try it, too. I only served once or twice, and that was during the school week, not during weekend Mass, but we’d made our point, and we were satisfied. Today, I’m encouraged because wherever I attend Mass, I often see girl servers, which perhaps will be an impetus for change (hopefully sooner rather than later) in the Catholic Church regarding women’s ordainment as priests. But that discussion is for a different essay.

Title IX allowed me to discover my potential, not just as an athlete, but also as a human being. Participating and excelling in athletics prepared me for dealing with and conquering life’s challenges and gave me the confidence to live life on my terms and to follow some of my dreams, no matter how unrealistic they may seem to others or how scary they may be to me.

Ladies, how has participation in athletics positively impacted your life?
Posted by Deborah at 6:25 AM 3 comments:

“Get swabbed!” was the directive printed on all the promotional materials for the DKMS and Leukemia & Lymphoma Society (LLS) bone marrow donor drive held today (September 25) at Beth Israel Medical Center in Manhattan.  I knew I wanted to volunteer to work this event the moment I received the email inquiry for volunteers from the LLS. As a blood cancer survivor who was lucky enough to have had a sibling bone marrow donor, I am acutely aware of the patients who are not so fortunate.
I was one of the volunteers situated at the information tables—the first area where potential donors stopped before being tested. Our job was to make sure they were not already in the registry, that they met certain criteria, and that they understood both methods for donating bone marrow: the peripheral blood stem cell (PBSC) draw (approximately 70-80% of collections are performed this way) and the bone marrow extraction (approximately 20-30% of collections are performed this way).
We also had to inform them that they would be on the registry until age 61 and that they are donating to any searching patient who matches their tissue type. After visiting our table, they proceeded to registration and testing. Testing involved swabbing the inside of both their cheeks with cotton-tipped swabs. These swabs will be sent to a lab for HLA testing and entered into the Be The Match Registry (operated by the National Marrow Donor Program (NMDP)). Donor data is entered in anonymous form and all information is confidential.
Per the NMDP, only 3 out of every 10 patients will receive a transplant that could save their lives. I was so inspired by those who showed up today, and especially pleased at the number of black and Hispanic people who were there, because it is these populations that are sorely underrepresented in the registry.
I encourage all of you to get swabbed; be a bone marrow donor.  This afternoon, a young woman who works for DKMS said, “Imagine if everyone in this country were in the registry.” Yes, imagine! If I could, I would be in the registry, but I’ve had cancer, so I cannot; though that is not true for all cancers, as there are exceptions: cervical, breast, and bladder (stage o) and cured skin cancer.
If interested in becoming a bone marrow donor, or if you want to help in some way, here are some ideas per the DKMS brochure:
Those who know me, and are familiar with my history, understand how much the work of DKMS, Be The Match, the LLS and other cancer organizations means to me. Again, I encourage you to consider becoming a bone marrow donor. You never know whose life you may save, and to them, your generosity and courage will mean the world; you will be their hero. I guarantee it!
Posted by Deborah at 3:35 PM No comments:

Writing For Your Life: Journal Writing Workshop for Cancer Survivors

The next Writing for Your Life workshop is scheduled!

The Goal of Writing for Your Life
To use writing as a means to empower the cancer patient during diagnosis, treatment, and recovery by:
1.) Coming to terms with your illness
2.) Exploring your emotional life and any difficult issues with which you may be struggling
3.) Formulating ideas for living fully in the present, while fighting cancer
4.) Devising strategies that will aid in the healing of mind, body, and spirit
5.) Clarifying and outlining your hopes for the future

Caregivers are welcome to attend, as well.