“ Honey, you want to go to the john and get one of those glasses before you leave, you look like you could use a drink.”

That was my closing line of The Moonshot Tape. Pulitzer Prize-winning playwright Lanford Wilson* clapped and smiled then rose from his seat, walked over to me, and hugged me warmly. He had loved my performance, which I’d just given in Ovation Theatre Company’s (OTC) warehouse where we built our sets, stored props and costumes, and often rehearsed. This had been a private performance for Mr. Wilson, along with my Ovation colleagues and a couple of my closest friends, by special invitation. I would go on to perform this 55-minute solo show a week later during Ovations’ two-week run of An Evening with Lanford Wilson. We staged four of his one-act plays during Cincinnati’s Lanford Wilson Theatre Festival in May of 2001. 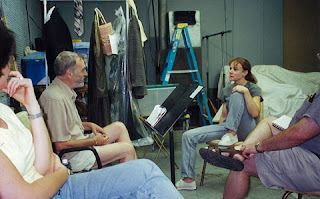 After the performance - Lanford Wilson giving me feedback.


It takes a great deal of courage to get onstage and perform alone for that length of time, but I did not find that courage overnight. It took years of accepting bigger and more challenging roles to be comfortable (or as comfortable as one can be) in a solo performance situation.

I did not begin acting until I was twenty-three. By that age, many of the young actors I was studying with had been performing for years—on stage and in front of the camera—in grade school, high school, and college. I struggled with confidence—and still do to some degree—because I let all their years on the boards or in front of the camera intimidate me. Still, I wanted to be an actor, so I pushed through the fear and insecurity.

My first time on stage was a production of original one-acts in Bloomington, Indiana, that took place in a tiny, freezing theater—actually a warehouse. I memorized my lines and my acting partner’s and basically responded by rote, not engaging in the moment to moment actions and emotions based on what my acting partner was giving me. Learning how to react appropriately, develop my inner monologue, and trust in the moment all developed over years of training and experience.

As I took on leading roles in plays, I learned to connect with the other actors and to trust that my lines would be there when it was time for me to speak. I didn’t have to think ahead to what my next line would be, but rather merely listen to what was being said to me. Acting is reacting. Plus knowing what you are thinking as someone is talking to you onstage is like in life…we always have thoughts running through our minds; so it is the same onstage, which adds to the life of the character.

I was cast in my first two-person play as Aurelia Plath in Letters Home the summer of 1992. It was scary but I managed to tackle it pretty well for a novice actor. Once I left Indiana University, I moved to Cincinnati where I was involved in community theatre prior to co-founding OTC, a semi-professional company. My first audition landed me in the role of Vera Claythorne, the leading lady in Agatha Christie’s Ten Little Indians. The video performance of that play is a testament to how significantly my acting has improved since then.

Shortly after Ten Little Indians,I was involved in a fifties/sixties-style musical review that East Side Players orchestrated before their production of West Side Story. I’d always wanted to sing in public and knew I had a decent voice, but again, lacked the audacity to do it (except for a talent show in eighth grade, where, with some of my girlfriends as back-up singers, I sang “The Rose” and “Midnight in Memphis” from The Rose soundtrack, and that was along with the actual recordings).

I found the courage to audition for the revue and got cast. A few months later, I performed the role of Grace Farrell in Annie in which I sang a solo and some duets. That eventually led to my being cast as the Witch in Into the Woods, and I loved, loved, loved playing the Witch—one of my favorite roles. (Thank you, Lisa Hall Breithaupt.)

My performance trajectory is as follows: supporting roles followed by leading roles then two-person shows—one (Parallel Lives) that included an eight-minute monologue and my playing fourteen different characters, eventually culminating in my one-woman performance of The Moonshot Tape. The revue, led to musicals then to cabaret performances that I wrote and performed—two to three sets per show. My acting and singing solo performances were built on the foundation of taking risks with more challenging and scarier projects over time. When I succeeded at each level, I moved on to the next one.

Meeting, performing for, and receiving excellent feedback from Lanford Wilson was the pivotal moment in my decision to make the move to the New York City area to pursue acting professionally, which I’d wanted to do for ten years. Once my mind was made up, I set the wheels in motion, and how they turned in my favor. That story is for an upcoming post. Stay tuned…as the saying goes: be careful what you wish for…