Write it Down, Make it Happen (Part II)

Ovation Theatre Company staged its first production on August 21, 1998. I and my fellow co-founders reveled in our accomplishment.

Fast forward to early 2000: I was managing director of Ovation and vice president of the newly-formed League of Cincinnati Theatres (LCT). LCT was formed in 1999 in large part due to the proliferation of small professional theatre companies like Ovation. The organization's mission: "to strengthen, nurture and promote Cincinnati's theatre community."

I was in an executive LCT meeting one day when the conversation turned to Cincinnati Playhouse in Park's upcoming season. They had slotted Talley's Folly in the spring of 2001. At that time, D. Lynn Meyers was the President of LCT and the producing artistic director (still is) of Ensemble Theatre of Cincinnati. She informed us that ETC was planning to jump on Playhouse's bandwagon and stage Wilson's Sense of Place during the same time period.

An idea ignited in my brain. I could hardly contain myself. Ovation needed to jump on that bandwagon too. This was my opportunity to perform a dream role I'd been writing about for years, but how could I persuade Ovation to stage Wilson's one-woman, one-act, The Moonshot Tape?

I brought this up at Ovation's next board meeting. We were in the process of planning the next season, so it was the perfect time to have this conversation. Joe, our artistic director, suggested we do a night of Lanford Wilson one-act plays. Unbeknownst to me—and seriously, how did I not know this?—Wilson had written dozens of one-acts.

We read through many and selected four, one of which was The Moonshot Tape. I immediately asked my Talley's Folly director, Mike, to work with me, as I'd told him I would in 1997. I was going to be onstage alone for fifty-five minutes. It was thrilling but I had no idea it would get even more exciting.

Two other small theatre companies decided they would also stage Lanford Wilson shows that May. There were now five companies producing Wilson's work, so it was decided to create a Lanford Wilson Theatre Festival, which generated a good deal of publicity for the smaller companies. To kick off the festival there was a reception at Cincinnati Playhouse. The guests of honor were Marshall Mason, a long-time collaborator of Mr. Wilson's, and Lanford Wilson. I met my favorite playwright. 'Pinch me,' I thought.
While talking to Marshall Mason, he asked what play Ovation was producing. I told him about the one-acts and that I was performing The Moonshot Tape. He told me that was one of Lanford's most personal pieces. Knowing that Ovation's opening wasn't until the following week and Mr. Wilson would be gone by then and unable to attend one of our shows, Marshall suggested Ovation host a private performance at our rehearsal space for him.

Thankfully, I was performance ready. I had worked on my character religiously over the past year, creating a biography for Diane, breaking the script down into beats, memorizing the end of the play and working back toward the beginning. I took copious notes and researched the time period and references in the play with which I was unfamiliar. I knew my character intimately and my lines were memorized by the time we began the eight-week rehearsal period, which is what my goal had been.

Mike picked up Mr. Wilson that Saturday morning and drove him to our rehearsal warehouse where I gave a private performance for a Pulitzer-Prize winner, my Ovation colleagues, and select friends. Lanford Wilson loved it. It was such an honor to perform for him and because he had praised my work so highly, it gave me the courage to finally commit, after ten years, to move to the New York City area to pursue a professional acting career.

I never imagined in my wildest dreams that performing Diane in The Moonshot Tape would lead to one of the most exciting, pivotal performance experiences of my life. Moreover, I was thirty-five when I played Diane, the same age as the character. I had also been thirty-one like Sally Talley in Talley's Folly. I felt like Lanford had written these women for me.

Can I say with 100% certainty that writing about these goals made them come true? No. However, without envisioning them, thinking about them, putting those wishes down on paper time after time and then taking action, they never would have happened. This is but one success story, composed of smaller ones, in my repertoire of how writing has shaped my life.

Think about any moments in your life that have manifest through your intentions. Did you spend time envisioning them? Did you write them down? If you cannot think of any examples or only a couple, I encourage you to test it for yourself, putting pen to paper or fingers to keyboard. It may take some time to see the results, so don't get frustrated. It took eight years to make performing The Moonshot Tape a reality. That only happened because of Ovation Theatre Company, meeting my Ovation co-founders through the Cincinnati community theatre scene, and being brave enough to go back to college to earn another degree in theatre and drama, all of which I wrote about extensively.

Write down your wishes and dreams, imagine what your life might look like, keep writing about it and be sure to inject your writing with passion—get your emotions involved. Be sure to follow this up with concrete actions. The outcome may be so much more incredible than you ever dreamed. 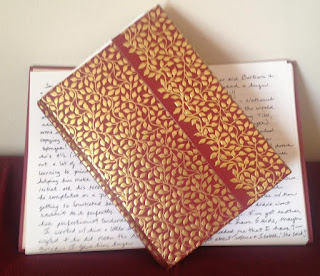 The examples I've provided in this two-part post demonstrate the power of imagination and writing, but action is also required. Work, even if only baby steps, is also necessary to propel you toward your goals and fulfill your potential. So, dear reader, what do you want to manifest?

Tip #5  - Take it out on your journal. It is the ideal place to vent your frustrations.

Sometimes one needs a place where they can safely express negative feelings. Rather than losing your cool at the office or with a loved one, which can easily escalate and lead to regret, retreat to your writing space at the first opportunity. There, lay it all out on the page or computer screen. I find venting is more effective when typing because I am better able to keep up with the thoughts racing through my head as opposed to handwriting them, which is considerably slower.

Allow all thoughts to appear on the page/screen. Do not censor them, just proceed with this task until you cannot, or do not, want to write any more. I guarantee you will feel a huge release from any pent-up negative energy. Do not read this entry immediately, if ever. Allow it to sit. Wait a few days if you do decide to review what you wrote. You can also choose to get rid of it. There are no rules. 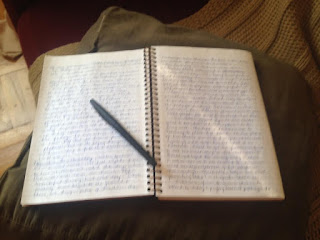 If after a few days you are still stewing over whatever happened that incited your anger, take some time to read through the entry, if you still have it. Are there any solutions?  Do you feel the need for additional angry writing? If so, go at it. I repeat this exercise two more times if there is a situation over which I am obsessing.

However, if you fail to find peace or resolution, you may need to talk it out with the offending person. If you cannot directly speak with that person, perhaps a trusted friend or a professional can provide some guidance that will lead to relief.

Anger is stressful. I've found writing out my anger to be an effective way to not only alleviate it, but also to find solutions for dealing with whomever or whatever has upset me, or at least resolve to get over it. The next time you want to strike out at someone, take it out on your journal first.

Posted by Deborah at 9:05 AM No comments: