Why I chose to burn my journals


I began journaling in 2004. Before then, I had made several attempts to keep a journal. Even as a young girl, I tried doing it, to no avail. What made me, at the age of forty-three, start journaling and keep going I don’t really know. Perhaps writing my first poem ignited the initial spark.
I possessed a variety of journals. There were large ones and small ones; some held colored pages and some plain white ones. Bold images adorned the covers of many while inspiring phrases were etched on the outside of others. I purchased them from different retail outlets: Barnes & Noble, Wal-Mart, Books-A-Million, monastery gift shops, etc. 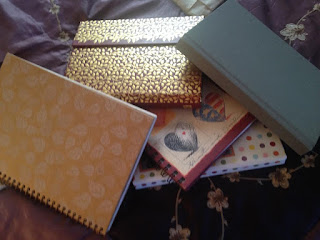 In the journals, I wrote poetry, recorded quotes, and took notes from books I was reading that I wanted to remember. I wrote about my days, jotted down information I learned from workshops and conferences, explored my perception of words said or actions taken by myself or others, stapled interesting magazine articles and paper-clipped notes from others onto the pages. Mainly though my journals were for prayers. I find it easier to pray when I write. I thought it was pretty cool that the main character, Aibileen, in Kathryn Stockett’s “The Help” also wrote her prayers.

By 2014, I had accumulated many journals. If I finished one and didn’t have another to start, which rarely occurred, I felt lost. Later that year, the urge to downsize came over me because I was ready to move from our big home to an apartment. It was hard work, sorting through all of our belongings and fitting all my clothes into one closet and one chest of drawers. Of the four large storage areas in our upstairs all but one are completely empty; the one that is not, is only half full. I secured all my journals in a large plastic tote and put them in the storage area, but something about their presence kept nagging at me.

I began to seriously consider if I wanted to keep them for my family to read. More importantly, did I really, truly want anyone to read them? I contemplated this for months, repeatedly going back and forth between the desire to keep or destroy them. Then one day my decision was clear: I did not want anyone reading my journals. Some things are best left between me and God. Furthermore, I was concerned that people would misconstrue what was written throughout those pages. The decision: They were to be burned.

I live in a small town, which has burning ordinances. Aside from the environmental rules and although we have a small fire pit, I knew it was sorely insufficient for my needs, so I called upon some friends. They reside in the country and have a large fire pit, so my husband and I packed up food for grilling and visited them one evening. We sat around the fire pit, grilled food, ate, and the journal burning commenced. I thought I might feel regret taking that action, but instead I felt a sense of freedom.

Their five-year-old granddaughter was visiting during some of the journal burning. She would pick up a journal, pretend to read it then ask if she could throw it into the fire. When she came upon those with beautiful images on the covers she would ask me, “Are you sure you want to burn it?” Eventually, she asked me why I was burning them.

I told her, “I just do not want them anymore, and I don’t want anyone else to read them.” That answer satisfied her.

Finally, there was one journal left. I had bought it at a monastery. It was diminutive with a blue vinyl-type cover—I don’t recall the words on it—and gold-edged pages. I had saved this one for last because I thought burning that particular material might stink. The little girl held onto to it for a long time, looking at the cover and touching the gold-trimmed pages. She asked me if she could keep this one. I told her, “No honey, they all need to be burned.” She sighed, said okay, and tossed it into the flames.

It took three and one-half hours to burn them all in that large fire pit. I wondered if I would have regrets as I watched them disintegrate into the flames. It has been close to a year now, and I can honestly say: I have no regrets. I did keep copies of my poetry though.

I wondered too if I would buy another journal. I haven’t and instead decided to use a one-inch binder and loose-leaf paper for any journaling. That way I can shred the pages when I feel the need. As stated previously, there are some things that need to stay between me and God. I’m okay with that.
Posted by Deborah at 12:18 PM No comments: