Back to the Stage 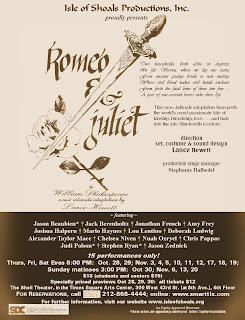 I will be back onstage for the first time since the summer of 2003 when Isle of Shoals Productions, Inc.'s Romeo & Juliet opens November 3. This absence has been mostly by choice. I have auditioned for very few plays since my cancer treatments, and the acting work I have booked has been in film, commercials, and television. I was recently cast in the role of Lady Capulet. It has been amusing that a number of people have suggested I might be Juliet by asking: “Are you playing Juliet?” While that question is flattering, I am way past the age of being cast in that role, considering that Juliet is 14—16 in the adaptation in which I am performing. However, I play mothers well, although Lady Capulet is hardly the ideal mother. She had very little involvement in the daily upbringing of Juliet; the childrearing responsibilities were designated to the nurse.
My Lady Capulet is independent and a bit headstrong; definitely not a woman subservient to her husband. Though she is a product of and adheres to the cultural mores of the Victorian era (in which this adaptation is set), she has a mind of her own as well as a sense of humor. I love that I was cast in this role for my reemergence on the stage because it is a perfect one for me.

Tonight is our first preview performance. This week has been a bit rough technically, slogging through the orchestration of light and sound cues and set changes. The previews will be essentially dress rehearsals with an audience. Yet in all the years I have been doing theatre, productions amazingly come together in the end, no matter how chaotic or stressful tech week may be.

Lance Hewett, my director, is a joy to work with. He has given the actors enormous creative freedom to experiment with acting choices and to make suggestions; I don’t think I’ve heard him give one line reading, which is quite refreshing. Of course, if he thinks something does not work or isn’t true to the character, he lets us know.

The cast is quite talented, especially for one with so many young actors, most of whom are in their early to mid twenties. I get a kick out of listening to them talk to each other, and yes, I’m one of the older members of the cast, but that’s okay. The generation gap isn’t too wide, and they are all funny, smart, lovely people. Chelsea, who plays Juliet, is adorable. It’s easy to portray her mother, and perhaps my interpretation of Lady Capulet is too loving and attentive to the teenage Juliet, yet that act of maternal betrayal remains.

I have been asked if I am nervous to perform onstage again. I am a little nervous, but in a good way. Nervous energy helps me to focus and be in the moment, especially when I know people who are in the audience—family, friends, co-workers. Right now, while I am writing this and thinking about it, a twinge of unease is churning around in my solar plexus. I think if I weren’t nervous, I’d be worried. One of the greatest actors of all time, Sir Lawrence Olivier, experienced intense anxiety before every stage performance. So if Olivier had to fight nerves, then I am struggling right there with the best of them.
Sometimes, I think my need to be out in front of an audience, acting or speaking, is a form of self-torture because there is always a slight element of fear simmering beneath. Some may call it narcissism, and in some instances, perhaps it is; but I see it more as the intense desire to express myself, whether through a character or as a cancer community or political issue advocate. As someone who as a child was shy and didn’t speak her mind and rarely took center stage, once I found the courage to do it, I discovered a freedom of expression I never knew existed.

Some of my need for recognition stems from the desire to please and be liked, but at the same time, it is scary to put your talent and ideas out in the public, where there is the possibility to be criticized—sometimes harshly. Not everyone is going to love or like what you do or say, but to do it anyway, to take a risk, is brave, and has many times reaped personal and career-related rewards for me. Despite the fear, it's the love of creative expression and the desire to communicate that drives me to take the stage or approach the podium.

So yes, I am excited to be back onstage again. Who knows what will happen out there in front of a live audience. I’ve definitely experienced my share of mishaps onstage, and I will try to share a few of those in a future post because they are worthy of retelling. The unknown of what may happen between actors onstage is frightening, yet thrilling, and ultimately, an adventure. My next adventure begins tonight and runs through November 20.
For performance and ticket information, click Romeo and Juliet - Isle of Shoals Productions, Inc.