This site is about how journaling and expressive writing can be tools for bettering your life. Starting today, a series of weekly tips will be posted. The first several are reasons—rather than tips—to consider starting a journal. However, for consistency, these reasons will be categorized as tips. 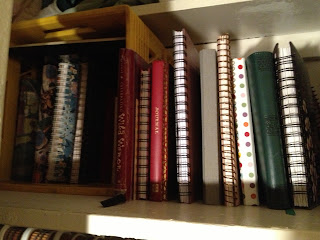 
It is a terrific way to chronicle your life—the ups and downs, triumphs and challenges, milestones and every-day occurrences, interactions with family, friends, and colleagues, as well as all the interests and ideas that comprise your unique existence. It also provides information about the time period in which you reside. Your journal is a legacy, a gift of insights, knowledge, musings, inspiration, and historical context, that you can bestow to future generations, should you be so inclined.
Posted by Deborah at 10:44 AM No comments:

I became acquainted with Sylvia Plath in the spring of 1992 when I was cast in the play Letters Home, based on the book Letters Home, which is a compilation of the letters Sylvia wrote to her mother, Aurelia, from the time she entered Smith College in 1952 until her suicide in 1963. No, I was not cast as Sylvia, but rather at the ripe old age of twenty-six, her sixty-seven-year-old mother. Still, I was up to the challenge and very excited to have the opportunity to perform in my first two-person show.

In addition to studying the script, I read the book, but I still wanted to learn as much about Sylvia’s life as possible in order to play her mother more convincingly. I visited libraries and bookstores seeking additional material on both women, but the jewel of my biographical treasure hunt was a small paperback titled The Journals of Sylvia Plath. I was riveted by her writing, the way she utilized language to record events and feelings, her desires and dislikes, the obsession about her talent as a writer and her career. Reading this book inspired me to start my own journal and use it to develop my character so that I would embody Aurelia Schober Plath by opening night.
I ventured to the bookstore once again and found the area where journals were displayed. My goal was to select the perfect one to commence my writing adventure, and it didn’t take long to find it. I had taken several art history courses in college and was particularly fond of styles popular in Europe and Russia from around 1850 through the 1940s, so when I spotted a journal with George Seurat’s masterpiece Sunday Afternoon on the Island of La Grande Jatte, I knew it was to be mine. The pages were unlined and a white cloth marker was attached so that I could easily mark where the next entry should start.
I immediately put pen to paper once home. Here is an excerpt from that initial journal post:
June 9 – Tuesday:
I bought this gorgeous journal today. I love the cover: Seurat’s pointillism technique is fascinating…
Since I’ve been studying Sylvia Plath’s life—reading her letters, poetry, and journals, the desire to record feelings and events in my own life has become very intense. Today, I decided after the play is over, I’m going to contact some agencies in Indianapolis and see if I can get an agent and some commercial work. I’ve got to do something to earn more money and what better way to do it than by acting—what I love to do—and gain some experience at the same time.
Reading Sylvia’s journals and letters, my writing seems so amateurish and trite. The way she expresses herself and the eloquent language she uses—impeccably structured sentences and an extensive vocabulary—sparks a bit of jealousy because I’ve always thought writing a story, play, or novel would be so gratifying.
Doing this play has me totally consumed with knowing Sylvia, even though I play her mother, Aurelia. However, what better way to portray a mother than knowing her daughter intimately, and how the daughter feels about the mother, whether positive or negative. Sylvia’s life was fascinating (so was Aurelia’s), and I feel extremely fortunate to have been given this opportunity. Tomorrow I start memorizing Act II. Laura [director] says tomorrow in rehearsal we’re going to solidify Act I blocking then Thursday, start blocking Act II.
Throughout that rehearsal period, I recorded thoughts about my character and her relationship to her daughter, explored the actions, reactions, tactics, and objectives Aurelia (I) would use, and created a detailed biography—all those wonderful explorations actors undertake in fleshing out their characters to make them believable and interesting. Through rehearsals and opening night until closing, I continued to write about my character, my performance, and the audiences—documenting the nuances of the entire experience. I felt a genuine sense of fulfillment and pride taking on that role and stretching my acting capabilities. Furthermore, I am glad that time period and that accomplishment are captured in a journal because those entries reveal how much I have grown over the years both as a professional and a person.
Writing in my journal eventually became a habit, though not necessarily a daily one. I can go weeks without writing a word, then at other times an all-consuming event or problem holds my attention and I write daily, even multiple times a day. It is an integral part of my life, and the journey continues. Thank you, Sylvia, for the inspiration.

Please let me know in the comments: Why did you begin journal writing? What did your first journal look like?