I was cleaning my bedroom Sunday afternoon and that included reorganizing my journals in their proper order. As is customary when I do this, I was compelled to open them to random pages and read some entries.

The first I came upon were two letters I’d written, separately, to my parents about a month before my move from Cincinnati to New Jersey to pursue an acting career in the New York City market. I knew they were concerned for my safety, especially since it had not yet been one year since the 9/11 attacks on the World Trade Center. In those letters I reassured them that I would be fine, that I loved them, and how much I valued their guidance and love throughout the years. I made a note to myself to ask Mom if she still had those letters. (She does.) I had totally forgotten that I had written them. The content was unsurprising because I’ve always been quite sentimental and emotionally open with those closest to me. 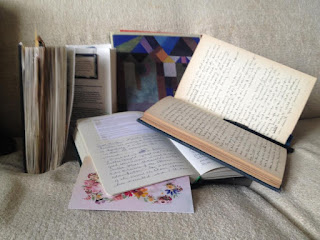 The second entry I read was the first one in that journal, dated February 17, 2002. It was still about six months prior to my departure and in one paragraph I’d written about what I envisioned my life to look like in 2012. Well, it is 2015 and my life little resembles that which I had hoped for or envisioned at that time. This made me stop and ask myself some questions:


This to me is the value of journal writing. Unexpectedly finding ideas from your younger self and discovering that you are wiser, or maybe not, and reflecting on where you are in your current life—how it works and where it needs improvement.

To answer the above questions, no, I do not feel like a failure. Does some of it disappoint me? Yes and I’d be lying if I said it didn’t, knowing the expectation, excitement, and hope behind those dreams and goals.

I always longed to be an actor and was for a while although never at the level I’d imagined. My acting and singing work was quite prolific during my Cincinnati years, and I loved it. It was when I moved to the Northeast and decided to try to make a living at it that much of the joy was lost in performing. The business aspect diminished my love for the craft. Being in my late thirties when I made the move, getting leukemia fourteen months later, and starting at it again in my early forties, without a manager or agent, was really tough. I know. Those are a lot of excuses but most are valid, and after cancer, my priorities changed.

Asking the above questions encouraged me to dig into the "whys" and "hows" of ending up where I am currently. Instead of feeling down about it, when reviewing what I have accomplished, the people who have shown up in my life, as well as the independence and financial well-being I now possess—which I sorely lacked thirteen years ago—reassures me that I am no failure.

I pursued acting for five years post-cancer, during which time I also wrote a book, began volunteering in the cancer community, speaking, started a journal writing workshop for cancer survivors, and became more politically active, especially blogging on politics. Current events, domestic and global, captured my attention much more so than events happening in the entertainment industry. My actor friends talked acting while I talked politics, which was a major clue as to how my goals and interests were evolving.


Annual trips abroad commenced in 2006. Those experiences have been transformative, especially my solo trips to Paris in 2012 and this past spring to Ireland, Scotland, and England. These adventures have increased my confidence and made me more independent. I possess a self-assurance of which that woman back in February 2002 could've only dreamed.


I am single, never been married, nor do I have children. However, I do have kids in my life who are like my own, and they are precious to me. We have an excellent relationship. Adoption was always a possibility for me, even if I remained single, but as I’ve aged and have my nieces and nephews, the desire to adopt has disappeared.

While my life may not be the grand vision of thirteen years ago, it is a wonderful one filled with much love. I have everything I need, I’m healthy, and more importantly, over a decade since my leukemia diagnosis, I’m still here. I commit to living each day to the fullest. Furthermore, by my definition, I am successful: I do what I want, when I want, and live life on my terms. It has definitely been an adventure. Still, there is much to accomplish because, well, that's who I am.

One thing I have forgotten over the years is my mantra: "Leap, and the net will appear." Practicing that has worked for me many times. The goals I have now set—reset rather—for my future, start now with that first leap of faith, propelling me forward. It's time to leap.

The next time you read through your journals, take some time to reflect on where you've been, where you are now, and what twists and turns brought you to your current situation. It's worth exploring in order to keep moving forward, and on track; or if necessary, to change tracks. So dear reader, what are you leaping toward?