Every 9/11 leads me back home to Tell City, Indiana

I was working in downtown Cincinnati at the Cigna offices on Seventh Street when my boss received a call from his dad in the New York office letting him know a plane had hit one of the World Trade Center towers. He shared this information with us, and we all assumed it was a small plane and the pilot had somehow lost control.
It was a splendid September morning in Cincinnati, just like it was in New York City: warm, sunny, clear blue skies. The weather was perfect. Soon that blue NYC sky would turn to dark gray then black.
We gathered in the kitchenette where a TV had been turned on and were stunned by what we saw: a gaping hole in the North Tower with fire spewing out of it. I was horror struck, and even more so as we witnessed the second plane, United 175, crash into the South Tower. The shock of it was chilling. We remained glued to the television and when American Airlines Flight 77 hit the Pentagon, I lost it, crying and wondering, 'what city would be next?'
I made my way back to my desk and called my sister Karen, who I knew would be home. She was working on her dissertation. I told her to turn on the television. As we were talking, she gasped and said, “Oh, my God. One of the towers just fell.” Shortly afterwards, we were all sent home. Even away from the chaos and fear, we felt it and didn’t know if we too might be next on the target list. I made it home just before Tower One crumbled, a sheet of ash and smoke cascading to the street.
I spent the next few days glued to the television. Somehow I felt that if I paid attention, sat vigil with the emergency workers, medical personnel, the people searching for loved ones, and New Yorkers trying to cope with the devastation to their city, that somehow I was offering them support, love, and strength. My sister nagged me to turn off the TV because my nonstop mourning was becoming unhealthy.
I thought that with the number of people affected by this tragedy that most Americans probably would know someone who worked in the World Trade Center or knew someone who did. Well, it ended up that I did know someone. Two people, actually: one who got out, another who did not. Her name was Stacey Peak. She graduated high school a year ahead of me. She was 36.

Stacey was from my hometown in southern Indiana and had been living in New York City for about two years, working at Cantor Fitzgerald as a gas/power stock broker. I heard the news from my mother. She told me that Stacey’s mother had received a call from her that morning. She was on the 105th floor of the North Tower when she made the call. Newspaper reports later revealed that her mother said Stacey was hysterical when she called, telling her that she was trapped and didn’t know if she’d be able to get out. She told her mother she loved her and then had to hang up.
I am forever haunted by that detail, wondering what those last moments of her life must have been like, the horror of rising flames and intensifying heat, knowing you were about to die. I know that is morbid, but it’s what I can never stop thinking about when I see photos of her lovely face and hear stories from friends and family. I also think of the helplessness her mother must have felt, not being able to protect her, save her. The anguish must have been intolerable and suffocating, as she waited for news of her daughter, holding out hope that somehow she escaped the carnage.
I did not know Stacey except casually, but the hometown connection, and discovering that she was single, never married, living life on her terms, taking acting classes, all of it somehow connected me to her. Sadly, her remains were never found. There is a memorial to her erected in our hometown, Tell City, Indiana, in Sunset Park by the Ohio River. Every year on September 11, the Perry County News highlights a story about her and local news stations in Evansville remember people from the area who perished that day as well.
Healing definitely takes time and the scars from that fateful day remain, the images and stories etched in our collective memory—for those of us who lived through it anyway. So as I do every year on this date, I will take a moment to remember Stacey as well as the other victims and their families, send a smile and a blessing heavenwards, say a prayer for her family and friends, and recommit to doing my best to try to make this world a better, more peaceful place.

Posted by Deborah at 4:39 AM No comments:

I’ve found that rereading past journal entries sparks ideas for articles or books. Take some time to peruse your writing and see how you might be able produce an article or story that will entertain or benefit others in some way, as I did with my journal of 2004 when I was going through cancer treatments, which became my book, a memoir, Rebirth. 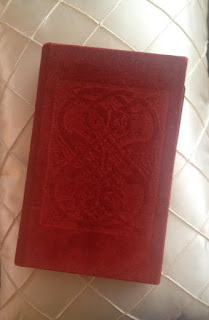 Recently, I included a letter I wrote to the Police Commissioner of Covington, Kentucky, back in 1999 in a political piece on police abuse of power. I was able to reproduce it and insert it as a PDF in the post because I had formatted it to fit my 1999 journal, printed it off, and taped it onto the pages—saved for posterity and (unbeknownst to me at that time) my political blogging sixteen years later.

Explore your journals. You may find some gems in those pages that will ignite your creativity and/or advocacy and activism.
Posted by Deborah at 6:15 AM No comments: