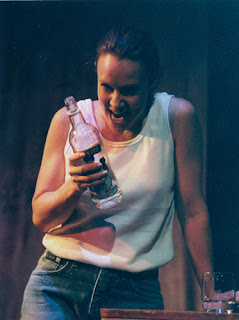 Saturday, walking to One on One studios to attend a class with a television and film casting director, for one brief moment, I felt the urge to turn around and flee, to just blow off the class, even though I had paid $125 for the 90-minute session. I had spent the week preparing the scene and felt confident about my choices, yet a feeling of dread hung over me. I am much more comfortable these days than I’ve ever been in the past when auditioning, yet there remains a slight twinge of fear—fear of completely messing up, fear of making a fool of myself, fear of not being as good as the other actors in the room.

Fear—hate it. Yet despite the fear, I forged forward. The last time I attended one of these classes, it went very well. What I like about attending class at One on One is that all the actors are talented. There isn’t an obvious gap between the beginners and the pros, mostly because the One on One staff screen actors (audition and interview are required) before allowing them to become members, then a one-time membership fee must be paid.

I arrived a few minutes early. The class size was small—eight of us. The casting director had a very warm personality and she gave us excellent feedback on our work. We each got up and performed our scene on-camera (with a reader) and then were given adjustments before doing the scene again.

These classes and meetings are ways for me to introduce myself to industry people, and since I do not have a legit agent, it behooves me to meet as many casting people as possible, especially those who are casting television series and movies because that is where my real interests lie. These sessions are also a way to stretch myself and take risks with the character choices I make.

Taking risks is scary, but it is in the very taking of those risks that we grow and discover what we are truly capable of doing. After each small victory, we become increasingly confident to attempt something even scarier. A couple examples from my life of when baby steps led to accomplishing larger goals were performing a one-hour, one-woman play and writing and singing cabaret.

The confidence to perform solo began with being cast in leading roles. There was Vera Claythorne, in Agatha Christie’s Ten Little Indians in 1994 followed by Rita Boyle in Prelude to a Kiss in 1995. Then came the opportunity to perform in two-person shows: the first (and one of my favorites) as Sally Talley in Talley’s Folly and then with my dear friend Lisa in Ovation Theatre Company’s (the company we founded with three other friends) inaugural production, a two-woman play titled Parallel Lives: The Kathy & Mo Show. In that show, I braved a harrowing monologue that was nearly 10-minutes long. That monologue provided me the experience of commanding the stage myself—no one else was there to save me should I forget a line or lose my train of thought.

Then in May 2001, a dream came true; a spark of creative desire ignited eight years earlier suddenly became reality: The opportunity to play my dream role, Diane in Lanford Wilson’s The Moonshot Tape, was going to happen. This one-woman, one-act dared me to own the stage for fifty-five minutes. It was the scariest yet most exhilarating challenge I’ve undertaken to date. Other challenges coming in at a close second are publishing my book, Rebirth, and performing cabaret shows.

The cabaret performances started their evolution years before the actual ones took place. I auditioned for some musicals after my first year in Cincinnati and was cast in Godspell (I sang a solo), My Fair Lady and Working (in the chorus), Annie as Grace Farrell (one solo and some duets; I wanted the role of Ms. Hannigan desperately, but that role went to Lisa, who is mentioned above) and finally Into the Woods as the Witch, the most amazing musical role I have ever worked on (bestowed upon me by, you guessed it, Lisa). That role cemented my confidence as a singer and my longing for further singing opportunities.

I’d always loved the old standards and felt drawn to the music of Ella Fitzgerald, Billie Holiday, Sarah Vaughan, Rosemary Clooney, and Peggy Lee, to name a few. One evening, while my friend Robin and I were at The Cabaret, a small club located in Over-the-Rhine, just north of downtown Cincinnati, I mustered the courage to sing, while the singer booked for the evening was on break. I requested the accompanist play Linda Ronstadt’s version of Someone to Watch Over Me. I was quite nervous but made it through the song beautifully, not one weak note or crack in my voice. When I returned to my seat, a gentleman at the next table asked me if I was going to sing again. I told him no; but from that moment, I was hooked.

So over the next year, I booked a couple performances at The Cabaret, where I sang two short sets during each performance. Finally, I decided to expand to a larger venue, Upstairs at Carol’s, and with the help of some of my genius marketing friends – Karen, Nelson and Lori—drew some sizable crowds and expanded my show to include three sets of music. My last cabaret performance was in Cincinnati in 2002 with my friend Joe. I did the first set, he sang the second set, and we performed the third one together.

So with these achievements under my belt, why am I not doing those things here and now in New York City? Granted, I have been less than enthusiastic taking the initiative to make contacts and pursue jobs the way I should, lacking the intensity that I see in other actors; or developing my own projects the way I did in the past. Excuses are plentiful: “I went through cancer, then I wrote a book (and I love writing, too, so I do that on a regular basis), I am a volunteer with the Leukemia & Lymphoma Society and have developed a journaling workshop for cancer survivors and caregivers. My life is extremely full. I have myriad interests, so my focus is all over the place.” Still, I long for those meaty, leading performance opportunities of yesteryear.

It's not that I haven't worked in acting since 2002 because I have. I've done stage, commercials, and independent films, but for a couple of exceptions, not at the level I had hoped to work. It’s now or never time to up my game—time to meet as many casting directors as possible, submit myself for all projects of interest, and seriously network with other actors. I'm even writing a cabaret performance for possible staging this fall.

In this insane business, I’m largely responsible for my progress, or lack thereof; I get in my own way. I must say yes to more auditions, even if I’m not overly excited about them. For example yesterday, I had an audition for a low-paying commercial. The audition was an open call, which I hate—I prefer to have a scheduled appointment. To top it off, I was submitted for the role of a person battling incontinence. (Oh how quickly one goes from being the young mom to the incontinence sufferer!)

Surprisingly, I had a blast in the audition—it was funny material and the casting director loved me. Here was a chance to meet a casting director as well as practice auditioning and making interesting choices with the copy. Each experience should be about learning something useful for future auditions, expanding what I am capable of doing, and building confidence. The casting session I approached with a negative attitude, ended up being quite a wonderful experience; just like on Saturday when I was feeling less than enthusiastic about my class, yet it was great. I even received a response from her after I sent her an email thank you on Monday. That has never happened.

Maybe things are looking up. Regardless, I’m trying to adjust my attitude and see every audition as a chance to perform because then maybe I won’t hate them so much. I’ll keep putting myself out there, taking chances, even at the risk of falling flat on my face. No risk, no reward—that’s what I’ve consistently discovered over the past fifteen years. My love-hate relationship with auditions will not end immediately, but I hope soon to feel more love for them than hate.

What do you have a love-hate relationship with? What is holding you back in achieving your goals?

Myself, money, time and the lack of opportunity because I live in the middle of nowhere, are what holds me back. It boggles my mind that even after working with a wonderful career coach for nine months last year and learning A LOT about myself, I still haven't made any kind of move. UGH! ~ Lisa H.