The article suggests how tourism can help revitalize rural communities, especially those whose populations are decreasing as young people move to cities where good jobs and opportunities are more plentiful. These towns are also proving to be a bridge to close the urban and rural divides in the United States. Every community and/or its region have unique attributes, be it a river, great hiking trails, distinctive retail outlets, local artists and artisans creating one-of-a-kind products or entertainment, lodging offered with a more personal touch, and much more.

My hometown newspaper, the Perry County News, published a story on December 26 about Cannelton, Indiana, resident Vince Gagliardi who is an avid hiker and organizer of guided hikes through the Hoosier National Forest. I discovered in the article, per Gagliardi, that the area in which I grew up has “…more miles of trails than any other county in the state.” That is a fact that Cannelton, Tell City (my hometown situated four miles from Cannelton), Perry County, and the state of Indiana should promote to lure visitors to the area and along with them, their spending dollars to help boost the local economies. 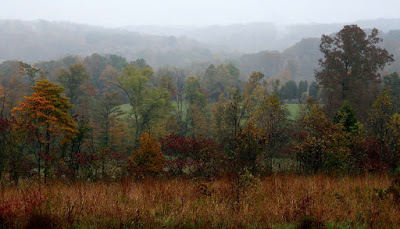 I reached out to Mr. Gagliardi with a few questions. He was gracious enough to respond and allow me to share his answers.

Deborah:  When did you start organizing guided hikes?

Vince:   Growing up in Maine I spent my fair share of time in the forest camping and hiking with my family. After moving to Perry County Indiana I quickly discovered the Hoosier National Forest and instantly fell in love. A close friend of mine introduced me to a gentleman named Bill Simpson. Bill had been in charge of the hiking club (Perry County Hiking Club) for fifteen plus years and invited me to join the group on a hike. It was great to be able to share the trail with other people. I proceeded to show up for the final six hikes, two of which I led because of Bill's health. He told me that he was done at the end of the season, and if I wanted to take it over, it was mine.

V:           The participation has been great! I have hiker friends who drive down from places like Bloomington and even farther north just to hike for the day. I have had people from all walks of life come out. Lawyers, teachers, stay at home moms, even a couple of nuns have become regulars. Believe it or not the majority are women who want to hike but not alone for fear of getting lost or the Boogeyman, which is perfectly understandable. Most have never even been hiking before but have an interest. That's why I included two low-mileage beginner hikes so that people could try hiking this distance before attempting longer ones. I have even thought about hosting an Intro to Hiking class one evening at the local convention center in the spring to help provide proper information. My wife likes to poke a little fun by telling me "You only want to do it to give you an excuse to talk about hiking." There's probably a little bit of truth to that. I believe I have the only wife in the world that can tell me to "take a hike" and actually mean it, but after ten years together, she knows what I need. I use it sometimes to detox from the stresses of daily life and always come back a calmer person.

V:            Yes, the schedule is a little limited. My predecessor had it that way to avoid hunting season and possibly hotter temperatures. However, I extended it until the end of April instead of ending in March, as was previously done. Next year I would like to try starting in October and ending in May. It is strictly volunteer, and I am a "one man show." It would be nice to get some help in the future though. A large group can get spread out so it would be nice to have a person in charge at both the front and the rear. Back in the 80's when the club was first formed, there was a yearly fee. Right now, anyone can participate for free. I'd like to keep it that way.

V:            Even though I own a successful auto repair shop in Cannelton and really enjoy what I do, I would love to get paid to hike. That would be my dream job!!

V:            As fantastic as it would be to open some sort of outdoor guide business, unfortunately, I really don't think there is enough interest in the area to properly sustain it, although I'm working with the county's tourism board to change that. I was told by the old timers numerous times that thirty years ago on a nice weekend the Hoosier National Forest in Perry County could have 10,000+ people hiking, horseback riding, and camping. It would be great to bring some of that interest back. Perry County has more miles of trails than any other in the state. I could talk for hours on the subject.

We wish Vince much success with this endeavor. Southern Indiana is beautiful, especially in the fall, so October hikes would be well-timed. Hiking is not only excellent exercise but also a great way to explore the area. Regardless whether the Perry County Hiking Club remains an avocation for Mr. Gagliardi or he transforms it into a business, this is an example of how rural communities and small towns could capitalize on their regional assets. If a town of 300 or 600 people can get creative and attract tourists, others can too.

Tourism directors in these communities, regions, and states should actively promote businesses, performances, excursions, etc., via websites, social media, and ads in national media—online and print. Although most small-business grants I've found tend to be for scientific/technological research and development or for nonprofits, grants could be used to develop tourist attractions and tourism-related businesses. It would behoove small towns across America to think more creatively about how they can exploit their unique attributes, implement strategies to invest in new businesses and artistic ventures as well as finance the marketing efforts necessary to help them succeed.

Could a Kickstarter campaign be a way of raising initial funding? It could. The Jennings Hotel in Joseph, Oregon, was funded via the Kickstarter platform. Are there low-interest, small-business loans available at a local bank or credit union? It will take money—private and public— to make money, but each community profiled in T+L are thriving and showing the world why a visit to their town is worth it.
Is tourism a cure-all for what ails small-town America? Probably not because hospitality and tourism jobs tend to be lower paid than those in manufacturing and technology. However, tourism can be one tool in the rural community revitalization toolbox.


For more information about the Perry County Hiking Club, visit their Facebook page.