Secretary Clinton and Me: Role Models 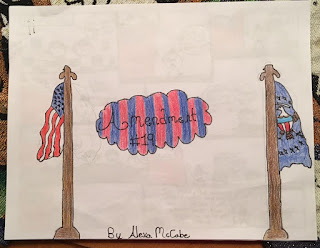 This past weekend, my niece Alexa shared her latest social studies project with me. She is in fifth grade, and they are learning about the amendments to the Constitution. She told me when she was assigned the 19th Amendment, she immediately thought of me. (She knows I'm all about empowering women and making our voices heard.)

I hope that by my example of being a single, independent, and outspoken woman my nieces—and nephews too—recognize and envision the various possibilities for women's lives. Their mothers who are my sisters, are wonderful role models too, as are their grandmothers. I like to think, because of all the amazing female role models surrounding them, my nephews will be more accepting of outspoken females as they become men than many of the male species who've preceded them.

Tomorrow, this gal heads to the polls to cast her vote for the first woman candidate for President. The thought brings tears to my eyes. It is emotional for me. After 44 men, 43 of whom were white men, finally, hopefully, a woman will occupy the Oval Office. Many Americans are holding their nose while voting for Hillary Clinton because Donald Trump is even more unpalatable to them. For me, however, I am voting for the best candidate, the one most suited and qualified for the job, hands down, not the lesser of two evils.

Hillary Clinton became one of my role models during the 1992 presidential campaign of her husband, Bill Clinton. Many people were offended by her comment: "Well, I suppose I could've stayed home and baked cookies and had teas, but what I decided to do was fulfill my profession, which I entered before my husband was in public life."

I loved it. She spoke to me, a young woman ready to take on the world with or without a man, wanting a career, and living life on her own terms, which I certainly do to this day. A different sort of first lady emerged, one that wasn't just set decoration for her husband's administration, but an active participant in government. That nontraditional role made her unpopular in some circles, and after her failed healthcare reform attempt that resulted in relentless criticism, she decreased her public profile.

Mrs. Clinton's tenacity, her willingness to get back up time and again after being knocked down, her refusal to take no for an answer, her ability to let all the vitriol and verbal attacks slide off her back, and her intelligence are what I admire most about her. I still hope to one day develop that level of tenacity, strength, and perseverance.

Secretary Clinton was forced to develop those traits having served in public life for many decades. Her list of accomplishments and credentials is extensive. She had been 1 of just 27 women among the 200-plus students in her law school class at Yale. She was one of only three [women] on a staff of 44 attorneys on the Watergate Impeachment team. She was the first woman hired at the prestigious Rose Law Firm in Little Rock.

As First Lady of Arkansas, she created the Home Instruction Program for Preschool Youth and led a task force to reform Arkansas's education system. As a senator (elected twice), she was instrumental in passing the State Children's Health Insurance Program; she served on five senate committees (Budget; Armed Services; Environmental and Public Works; Health, Education, Labor and Pensions; and the Special Committee on Aging); she had a leading role investigating the health issues faced by 9/11 first responders and worked closely with Senator Charles Schumer to secure $21.4 in funding for the World Trade Center site's redevelopment.

After losing a bruising run for president in 2008, President Obama appointed her his Secretary of State. As Secretary of State she set a record visiting countries, she brokered a cease fire deal between Hamas and Israel, and played a role in killing Osama bin Laden. She made LGBT rights a focus of U.S. foreign policy. Clinton has also worked to integrate women's issues into foreign policy, instead of relegating them to a separate sphere of policy making. This has come to be known as the Hillary Doctrine.

Researchers have found that there is more civil unrest and war, failed economies, and sexual abuse of and domestic violence against girls and women in countries in which women are impoverished, uneducated, and considered property. The premise of the Hillary Doctrine is that countries are more stable and secure when women are educated, employed, earn money, and contribute to the economy, and are treated as equals. There is more much more work to be done in this area. However, it appears that these issues, initiatives, and ideas only get enacted or move forward—or at least have a better chance of it—when women are at the table, making their voices heard, raising awareness, and creating policies. I believe Hillary Clinton will make even more strides toward global equality and education for women and girls.

Here's some inspiration from women who were born before the 19th Amendment was passed:

Mrs. Clinton has solid foreign policy knowledge and experience as well as a firm grasp on domestic issues. She is smart, she wants to learn, she listens. She worked well with her senate Republican colleagues, many of them have said so. The Secretary knows how to roll up her sleeves, put her head down, eschew the limelight and focus on the work. She wants to lead this nation, she is ambitious, and there is nothing wrong with that. Men are never criticized for being ambitious. She has every right to own her ambition, as does every woman.

It has been lamented during this general election campaign that there has been little focus on the issues. In reality, it has focused on issues—issues we prefer to ignore, sweep under the rug, pretend do not exist. Those issues are racism, sexism, and xenophobia. At least now, thanks to Donald Trump, these things cannot and should not be ignored. Hillary Clinton is not perfect, nor are—or were—any of the candidates running against her, not even Bernie Sanders. I guarantee had he been the candidate, the GOP would have had vast amounts of opposition research on him too, and because he resides further to the left on the political spectrum than Clinton, they would have painted him as a leftist kook. (I do not think he is, but conservatives would have certainly framed him that way.)

So, tomorrow, we Americans vote for the next leader of this great country. Alexa and her brothers know for whom I'll be casting my ballot. It is no secret, and they know my reasons, explained to them in generalities and age-appropriate language. Alexa and I are very close, so it is important to me that I am an excellent role model, that I am the kind of person she can and will respect and trust throughout her life even when we disagree. I think I'm doing a decent job so far. She told me this past weekend that she has two dance teachers and one she really likes. "She is fun, and nice, and I realized why I like her so much," she said.

"Because she reminds me of you. She even kind of looks like you, and she's sassy!" Alexa replied, laughing. That is one of the greatest compliments for which an aunt could receive.

I've attached a few articles below for this last day before we elect our next President. They are good reads, should you feel so inclined. Before you tackle those though, read Alexa's comic. I think you'll find it to be a little sassy. 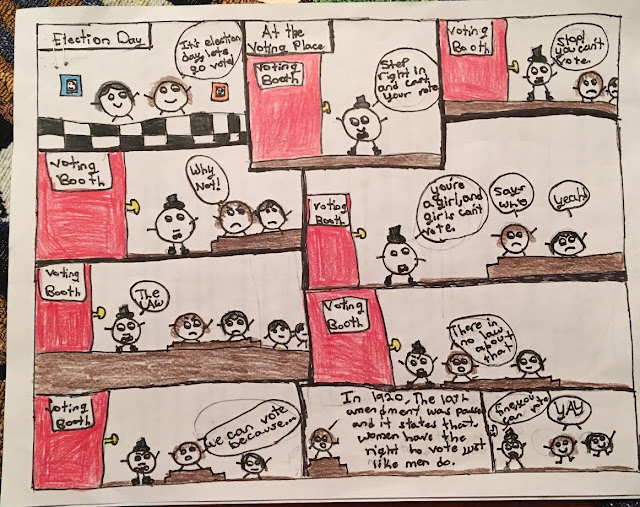