Thoughts after a week of violence

I love New York City for many reasons, and hate it for a few others. One reason I enjoy working in the city is that daily, I am in the midst of one of the greatest tapestries of humankind anywhere in the world. Even after fourteen years, I often still can't believe this small town girl from southern Indiana is thriving in this place.

Everywhere, there is interaction with people of various races, religions, and nationalities, speaking foreign languages and wear interesting clothing and accessories appropriate to their culture. Signs in the subway and around the city are often written in Spanish, Chinese, Italian, etc. Exposure to this diversity has increased my curiosity about others and the desire to understand their cultures and religions.

Hearing someone speak a language other than English, even if I know they are a U.S. citizen, doesn’t offend me. Instead of lashing out at them “to speak English” or stew in silent resentment, I try to figure out what they are saying, even eavesdrop a little. It takes much to impress me, but those who can speak two or more languages, that’s impressive. It’s one of the reasons I’ve started practicing French, Spanish, and Italian on a daily basis. I am heading to Greece in September, so now Greek is practiced too because it behooves me to know some basic vocabulary and conversational phrases while I am there. 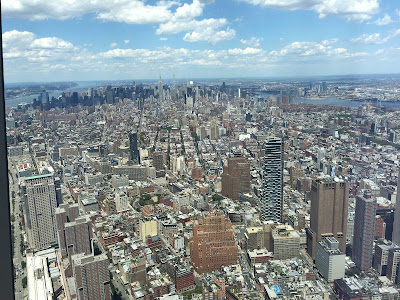 Too often we seek security and comfort in tribalism while foregoing engagement with those outside our tribe, which can create an “us against them” mentality. This does nothing to ease tensions where there are some, or allow us to better understand one another.

There seems to be an empathy deficit in our world. Why is that? Have humans always lacked empathy to some degree? That is foreign to me because empathy is one of the reasons my emotions suffer daily. The violence, atrocities, and injustices happening here and abroad pierce my heart—I internalize it all, even if it doesn’t affect me directly, which it rarely ever does. Still, I embrace the pain because maybe, just maybe if I feel it, it will lessen the pain for others actually experiencing it. I know, that sounds weird, even a bit obsessive, but it’s why I can watch, listen, or read about an ongoing tragedy for hours, even days at a time. If I’m engaged, if I’m paying attention, maybe somehow it will help those who are hurting.

This past week, three horrific events captured the nation's attention. Two African American men were killed at the hands of police in Louisiana and Minnesota: Alton Sterling was selling CDs and DVDs in a convenience store parking lot (with the owner's permission) when his deadly encounter occurred and Philando Castile was stopped for a broken tail light. Then on July 7, a sniper targeted police officers in Dallas near the end of a peaceful Black Lives Matter rally. Eleven officers were shot, five of whom died. The sniper was killed when a bomb was detonated by a robot the police had sent into the garage where he was hiding. Dallas officials remain tight-lipped because it’s early in the investigation, but this was an orchestrated operation designed specifically to kill white cops.

The sniper acted alone, that much we know as of now, or at least that's what we're told. He was not associated with the Black Lives Matter movement, as some on the right have suggested. Sadly, these tragedies more often than not lead to the ratcheting up of fear and anger from politicians and the media, which only serves to further fuel the flames of division.

We have some major healing to do in this country. Platitudes and prayers while fine are woefully inadequate. It's time to get serious and do the hard work of figuring out how to repair race relations, decrease poverty, address the violence rampant in our society, rethink some of our gun laws, train law enforcement officials to use less lethal force, and build better community relations between police officers and the citizens they serve and protect. It’s a tall order. It will be difficult, but something has to change. It's way past time we face these challenges head on. Will we?